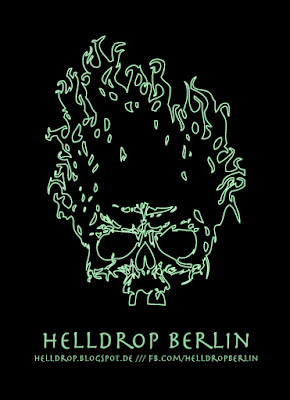 The wait is finally over and we are more than excited to tell you that our first ever release, HLLDRP001, has touched ground to deliver the full-on HellDrop Metal Breakcore infusion! 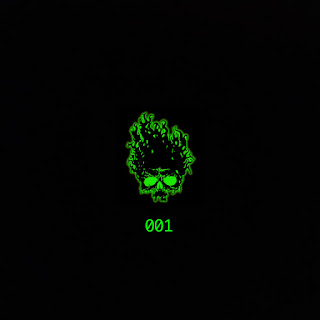 When we, Beatxo and Zim, started HellDrop in 2012, we had no idea what to expect. Back then, Berlin was different from today. Not as wild as in the 90s after the wall came down, but yet quite experimental, fun, and mostly very affordable. In this creative environment of obnoxious, over-the-top hardcore partying, the first ideas for a collective were formed at a not-too-legal party in an abandoned building in Berlin's Landsberger Allee. Beatxo was then smashing the floor with a blend of Drum-n-Bass, Breakcore, Dubstep and Glitch-Hop, while Zim was looking for a partner to continue bass endeavours originally started back in 2009 in another part of Germany.

Soon after Beatxo and Zim met at Landsberger Allee, HellDrop (check our Soundcloud) was created, to deliver skull-smashing breakbeat chaos with a Metal twist to Berlin.

What followed were parties at the legendary RAUM in Zigaer Straße, then at Berlin's top Drum-n-Bass location SUBLAND (R.I.P.!), the magnificent Hangar49 at Jannowitzbrücke and, later on, events at what is now known to bassheads as Void Berlin. Aside from their regular shows, HellDrop  performed as DJ team at locations such as Lauschangriff, Supamolly, Köpi, ZGK, and others.

Throughout the years, we had the pleasure to meet and host many wicked artists from all over the world, including but not limited to, in alphabetical order:


...and many more artists. Big up to all of you, you smashed it!

However, we couldn't have done it without the support by our visuals specialists, Ciners and Razzatomica of Kannibal Kitchen. Thank you!!!


Now, to make a long story short, we figured the only logical consequence out of our experience with bass heavy hardcore break-whatever music with a metal twist is starting a label of some sort, therefore we proudly present to you:

Our first ever release, HLLDRP001, features four of our favorite artists: Stazma the Junglechrist, DJ Skull Vomit, Sa†an, and Ulcerium! The EP delivers a unique combination of styles that we want to represent: Breakcore, Metal (of course with wicked guitar riffs!), and Drum-n-Bass. Or, as this blog is titled: Drum-n-Core Shizzle - not for the squeamish! In late 2017, we plan to release this massive record on Vinyl. Now go to https://helldrop.bandcamp.com and get your digital copy to support the vinyl pressing process! Buying the entire digital album for 5€ will get you four absolute bangers to bother your neighbours with, or to destroy any club floor on this earth, or to finally get you that idiopathic sudden sensorineural hearing loss that you always wanted, if you turn it up loud enough... no liability assumed though, lol.

This party is a commemoration of HellDrops founding in 2012 - Foxdye and Santisima Virgen Maria were among the first artists we had the pleasure to host (back then at RAUM, 'member?). And all of the artists playing now at Maze - among them they magnificent Company Fuck - have supported us over the years. Therefore: Don't miss this opportunity and join us! :) 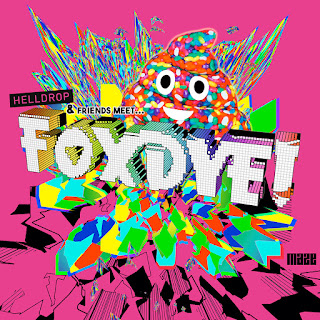 Also, this event is partly a fundraiser for... our first HellDrop Records release! More info about that soon... 50% of the party's profits go towards the release, the other half is split among the artists, so: bring your friends, share this event to help us out, and use the rare opportunity to experience the unstoppable live power of Foxdye while she's touring Europe! :) 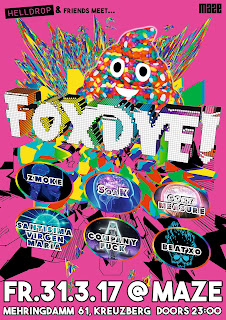 The wait is over, and what belongs together finally unites. HellDrop proudly presents: SA†AN 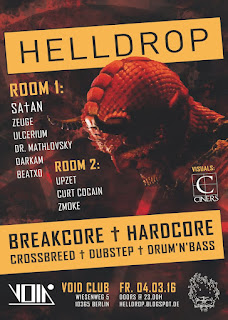